As the Los Angeles Lakers held a 3-1 lead over the Miami Heat in the 2020 NBA Finals, LeBron James gave an honest and accurate assessment of what he had learned during his two-plus years in Los Angeles as he and the Lakers prepared for Game 5 of the NBA Finals.

An answer that's as cerebral and perceptive as his reads of opposing defences over the past 17 seasons.

Coming off of an all-time postseason performance in 2018 with the Cleveland Cavaliers, LeBron elected to join the Lakers as a free agent, becoming the biggest free-agent signing in the franchise's storied history in the process.

James' reputation spoke for itself and because of his prominence and standing in the league, he immediately rose to the top of a list of Lakers free agent acquisitions that also includes the likes of Shaquille O'Neal, Gary Payton, Karl Malone and Jamaal Wilkes, though O'Neal's signing in 1996 is of the same class. 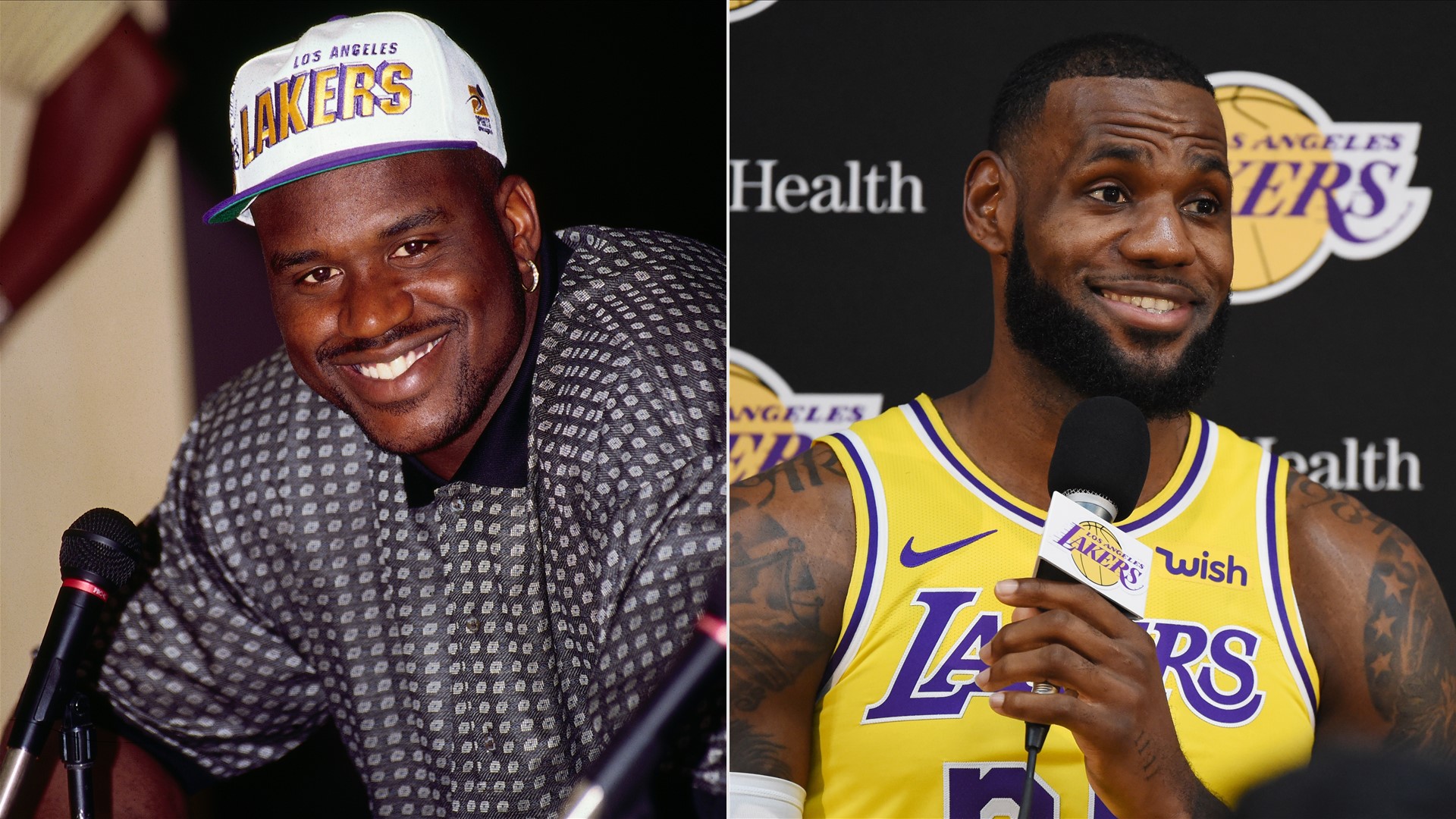 As counterintuitive as it may sound, signing on to join the Lakers doesn't make you a Laker; it's winning and sustained excellence in the Purple and Gold that gives a player that distinction.

From that standpoint, LeBron had his work cut out for him.

He joined a team that featured a group of young, potential-filled talents blended with a cast of players that many referred to as a "meme team" but still, James' reputation meant he was expected to lead them to the postseason, where the franchise had not been since 2013.

And before James' injury on Christmas Day 2018 derailed the Lakers' season, it appeared he was capable of doing just that. Instead, the drought reached a sixth-year as James was limited to just 55 games, which resulted in the team finishing with a 37-45 record.

LeBron finished his first season with averages of 27.4 points, 8.5 rebounds and 8.3 assists - good for Third Team All-NBA honours - but without winning, it didn't matter.

Again, perceptive as always, James took to Instagram when the Lakers were eliminated from playoff contention on March 24, 2019, saying "Believe me! Promise #LakerNation the spell won't last much longer! I swear. The marathon continues!"

Then came the offseason of 2019, when the aforementioned group of young talent was traded in exchange for another generational talent in Anthony Davis, who was drawn to the idea of playing alongside a player like James, even in his 17th season.

Despite an injury-riddled first season that had more losses than wins, James' profile elevated that of the Lakers back closer to where it was supposed to be. The feat of adding the lore back to Los Angeles can't be measured but it proved that LeBron had fully embraced being a Laker and was there to win.

But the team still needed to win.

Davis and James proved to be a seamless fit as they surpassed the team's win total in the 2018-19 season by Jan. 23, opening the season with a remarkable 36-9 record, good for one of the best starts in Lakers history.

Only three days later, the franchise was met with an unthinkable tragedy.

As the Lakers returned to Los Angeles from a five-game road trip on Jan. 26, 2020, they received the news that legend Kobe Bryant, his daughter, Gianna, and seven other passengers perished in a helicopter crash. When the team returned to the Staples Center floor five days later, James was the Laker entrusted with speaking on the life of Bryant, delivering an incredible speech that united the Laker family at an extremely challenging juncture.

"Tonight we celebrate the kid that came here at 18, retired at 38 and became probably the best dad we've seen over the last three years." pic.twitter.com/0sS7e91cuz

As documented in a Los Angeles Times article that chronicled the days after the tragedy, James vowed to do his part to help carry the franchise - players and staff alike - through trying times.

With the Bryant family on their minds and hearts, the Lakers went 9-2 in the month of February and, in March, strung together impressive back-to-back wins over the Milwaukee Bucks and LA Clippers that made the Lakers look to be a legitimate title contender.

But three days following their win over the Clippers, it was announced that the NBA season would be suspended indefinitely due to the coronavirus pandemic.

Basketball was no longer important.

Days, then weeks, then months passed as it appeared the once-magical season was a lost one. That is, until the fateful day in June when it was announced that the NBA had devised a comprehensive plan to reconvene a season that had plenty of scores to settle, one of which being between the Lakers and their in-arena rival in the Clippers.

It didn't take long for the teams to get a shot to face one another, as they met on the opening night of the NBA's Restart at Orlando's Walt Disney World, with James' game-winning putback delivering a two-point win, making the Lakers look like every bit of a title contender.

The narrative soon switched as the Lakers dropped five of the remaining seven seeding games and it appeared that James wouldn't be capable of leading this team very far, it was the most vulnerable LA had looked all season.

It was much ado about nothing.

With AD by his side, LeBron led the Lakers to their first Finals appearance since 2010 with averages of 26.7 points, 10.3 rebounds and 8.9 assists, including a 38-point, 16-rebound, 10-assist triple-double in the Western Conference Finals-clinching Game 5 win over the Denver Nuggets.

Just four wins away from making do on his promise and then some, James and the Lakers were as focused as ever, which brings things full circle, back to his comments ahead of Game 5.

Having been on the right side of such a historic comeback, LeBron knew that building a 3-1 series lead wasn't enough. In LA, where a title had been won in three of the past four decades, it's about finishing the job or else his promise wouldn't be fulfilled.

So as LeBron led the Lakers to their 17th NBA title with 28 points, 14 rebounds and 10 assists - earning his fourth Finals MVP in the process - there was extra meaning behind his post-game proclamation:

"It means a lot. It means a lot to represent this franchise. I told Jeanie [Buss, Lakers owner] when I came here that I was going to put this franchise back in a position where it belongs. Her late, great father did it for so many years and she just took it on after that and for me to be part of such a historical franchise is an unbelievable feeling, not only for myself but for my teammates, for the organization, for the coaches, for the trainers, everybody that's here. We just want our respect. Rob [Pelinka, Lakers GM] wants his respect, coach [Frank] Vogel wanted his respect, our organization want their respect, Laker Nation want their respect and I want my damn respect too."

He joins the likes of Bryant, O'Neal, Kareem Abdul-Jabbar, Wilt Chamberlain, Jerry West and James Worthy as Lakers to earn such an honour, with Abdul-Jabbar (2), Johnson (3) and O'Neal (3) doing so on multiple occasions.

In 27 months in Los Angeles, LeBron has experienced ups and downs and through it all, learned just how strong of a family the Laker family truly is.

He's clearly taken pride in having a hand in leading this franchise back to prominence and, as his MVP-level play suggests, has a number of years left playing at this level. All signs point to him doing so in the Purple and Gold.

Given his presence and accolades over the past two years, it's safe to say that James has now done enough for the Laker faitfhul to give a damn about what he's accomplished.

And James' No. 23 should one day hang alongside the banner(s) he helped to raise in the Staples Center.