The first weekend of the NBA restart at the Walt Disney World Resort in Florida is in the books, and through four days, there's been no shortage of entertaining games.

Of the 19 games played, eight have been decided by a margin of five points or fewer. In the West, the playoff races seem to have gotten even tighter. Given the tight race to the finish line in Orlando, expect changes in the standings to continue throughout the rest of the seeding games schedule.

With that said, here's a look at the 10 best games you should circle on your calendar for the upcoming week:

There's plenty at stake and plenty of big names in this matchup.

Despite a 41-point, 21-rebound, three-block performance from Joel Embiid, the 76ers lost their opener to the Indiana Pacers, as T.J. Warren torched them for 53 points. After one game, Philadelphia had plenty to discuss - the Shake Milton at point and Ben Simmons at the 4 line-up didn't do much damage against the Pacers, and the Embiid-Horford line-ups didn't work either . So, what now? Brett Brown and the Sixers have a few games to figure things out before facing a competitive Trail Blazers squad.

On the other hand, the Trail Blazers split their first two games in Orlando. They beat a young Memphis Grizzlies team in overtime before falling short of completing a 24-point comeback against Boston, battling hard in both games. If that's a sign of things to come, then every Portland game is must-see TV. Damian Lillard has been sensational and the big men returning from injury - Jusuf Nurkic and Zach Collins - have increased the Trail Blazers' depth, helping them compete no matter the opponent.

Will the heavily talented squad of the 76ers figure out their on-court chemistry by the time this contest comes around? Or will the Trail Blazers be able to win enough of the tough games on their schedule to keep their playoff hopes alive?

These teams looked very different the last time they met. In an entertaining finish, it was a Furkan Korkmaz 3 that sealed the deal for Philadelphia. 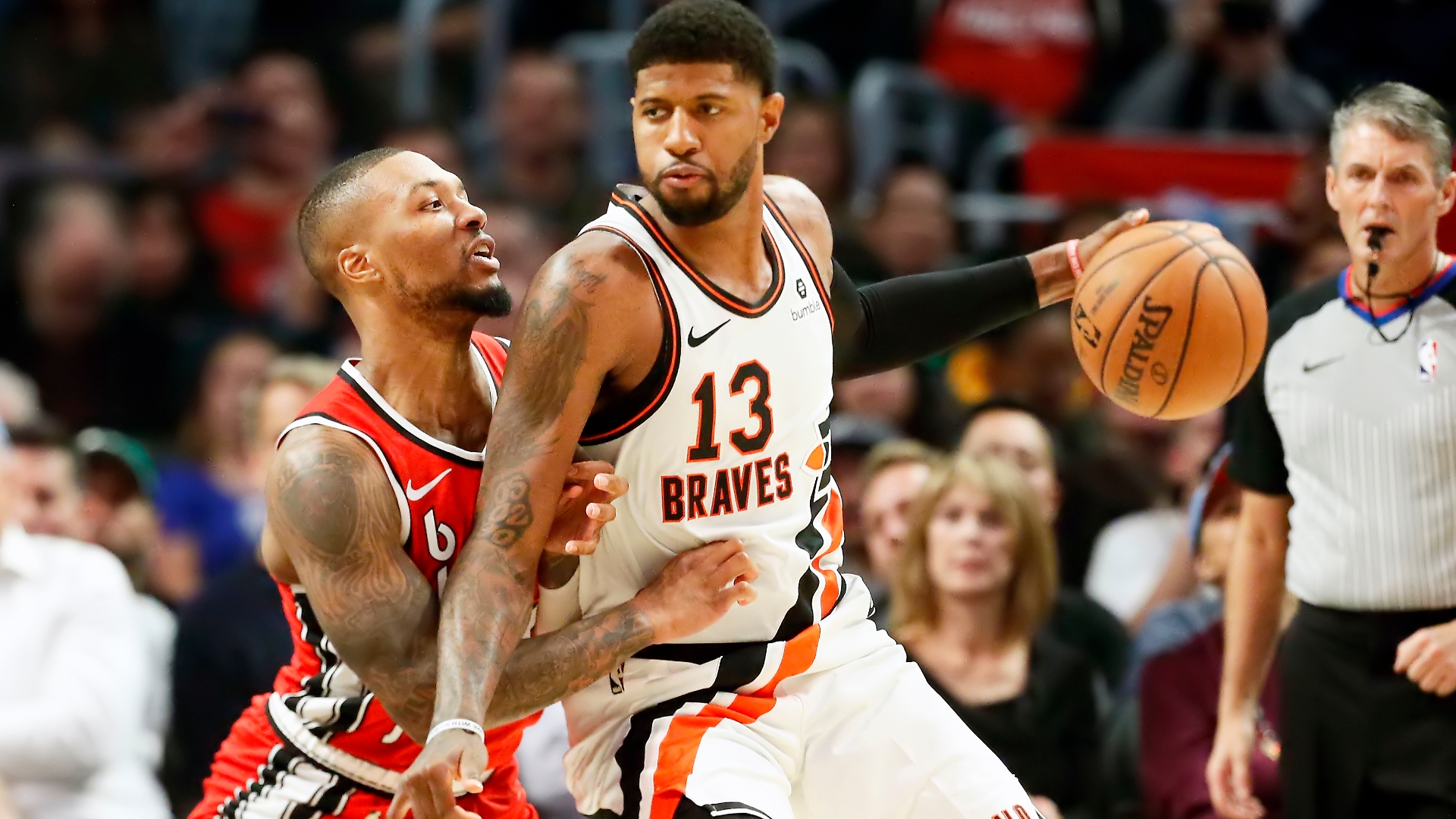 Questions surrounding the Clippers roster continuity still linger, even during the restart in Orlando.

In addition to a number of injuries, a mandatory 10-day quarantine for Lou Williams' and an excused absence from Montrezl Harrell has left the team experimenting with its starting lineups. For a contender that is one of just two teams that ranks in the top-five of offensive and defensive rating, the focus during these games is on game reps, rhythm and chemistry.

Given the Blazers' wing rotation, or lack thereof, the Clippers might be the toughest matchup that Portland would have to face in Orlando. Nearly every game is a must-win for the Blazers, so expect them to put up a fight in a competitive one.

In their two previous meetings, the Clippers cruised to victories by an averagin margin of 13 points.

The Miami Heat are one of only two teams to have beaten the league-leading Milwaukee Bucks twice this season. In their opening game of the restart the Heat cruised to a 125-105 victory over the Denver Nuggets. This Milwaukee contest caps off a three-game stretch in which the Heat also face off against the Toronto Raptors and the Boston Celtics. Can they sweep this stretch? It's critical for the Heat to pick up as many wins as possible because they are looking to catch the third-seed Celtics while keeping distance from the fifth-seeded Pacers.

For the Bucks, the majority of the seeding games are about game reps more than anything. They have essentially secured the East's top spot and are using these games to ease Eric Bledsoe and Pat Connaughton back into game shape while testing out their playoff line-ups and rotations.

We could very well end up seeing these two teams meet in the Eastern Conference semifinals.

To open their time in Orlando, the Lakers earned a close win over the Clippers before falling to the defending champion Raptors. Down two key guards in Avery Bradley (opt-out) and Rajon Rondo (thumb), there's clearly work to be done, and what better test for their current rotation of guards than to be tasked with slowing down Westbrook and Harden?

LA enters the week on the verge of clinching the West's top seed, meaning most of their seeding games will be used to figure out rotations and help the supporting cast get accustomed to their roles.

The Rockets, however, are stuck in a logjam in the middle of the West. They opened their time in Orlando by winning their first two games, placing them in the fourth seed to begin the week - one game behind the third-seeded Denver Nuggets and one game ahead of the sixth-seeded Oklahoma City Thunder. After Houston's solid opening weekend, gaining momentum heading into the postseason would only help

When they first fully embraced their small-ball identity, the Rockets defeated this Lakers team. So this isn't a game you'll want to miss.

No news of Jimmy Butler playing in this one so far, but this should be an exciting contest between the two of the top 10 teams in the league (by net rating).

Both these well-coached teams opened their seeding game scheduels by registering convincing wins over the Western Conference's elite. Adding to the intensity of this meeting are the stake: fourth-seeded Miami looks to continue to create distance from fifth-seeded Indiana in the standings while looking to gain ground on third-seeded Boston.

The Raptors, meanwhile, aren't in dire straits from a seeding perspective but look to continue their winning ways against a team they have failed to beat so far this season. Can they avoid a season sweep at the hands of the Heat?

The defending champions stand a chance to seal their position as the East's second seed by defeating the third-seeded Boston Celtics.

A Boston win would make things interesting as it would win the season series 3-1, earning a tiebreaker over Toronto should the two teams finish with identical records.

Aside from seeding implications, a key storyline to watch is Kemba Walker's playing time. Due to a lingering knee issue, the All-Star point guard has been under a minutes restriction; his playinh time is expected to gradually increase through the seeding games as the C's prepare for a postseason run.

The Celtics have already clinched the season series, having won their first two meetings with the Heat this season. A Boston win would create further distance in the standings and strengthen their hold on the third seed in the East. With Jayson Tatum finding his touch against the Trail Blazers, nearly every key Celtic has shown form in Florida. Now, it's about continuing to tune-up their play and a win against the Heat would certainly add to their confidence.

For the Heat, a win could help them make up some ground on the Celtics for the third seed. However, it's Miami's third game in four days, meaning fatigue could play a factor.

With the star power in action here, make sure to watch these two Eastern Conference teams grind it out.

Each of these teams are contending for the eighth and final playoff spot in the Western Conference but started their time in the bubble on the wrong foot, losing their first two games.

As neither team wants to open with a three-game losing streak, the intensity will be high.

These teams are similar in that they are young, entertaining and complete with throughout their respective rosters. Of course, the spotlight is on as it is the second of many meetings between Morant and Williamson, top two overall picks of the 2019 NBA Draft. In the first, Zion and the Pelicans earned a dominant 139-111 win.

Entering this one, the Pelicans are 3.5 games behind the Grizzlies in the standings, meaning a win would help them make up some ground. This game is bound to have the sparks, plus it has high seeding implications as well.

Nearly every game is a must-win for both Portland and Houston.

For the Blazers, it's to make the playoffs while for the Rockets, it's all about seeding. Both teams have competed hard in their first two seeding games, so expect nothing less when they face-off.

The Rockets will look to go 3-0 in seeding games with their super small-ball play while the Trail Blazers could look to counter by using big men Jusuf Nurkic, Hassan Whiteside and Zach Collins.

The guard play takes centre stage, with two of the league's best backcourts going toe-to-toe. And we know it's always fun to watch Lillard and Westbrook go at it.

In Chris Paul and LeBron James, this game sees arguably the two smartest active players in the NBA go against one another. The Thunder, whose closing unit of Paul, Gilgeous-Alexander, Dennis Schroder, Danilo Gallinari and Steven Adams stands as the best clutch line-up in the league, have plenty to play for seeding-wise.

By the end of the seeding period, OKC could finish as high as third or finish as low as sixth.

The Lakers have beaten the Thunder three times this season, but two of the games were closely contested. More importantly, the purple-and-gold could use a tune-up against a competitive playoff squad like the Thunder, who provide another tough defensive test for their uncertain backcourt.