A quiet day on the NBA calendar didn't come without plenty of excitement.

If you missed any of the action, check below for highlights, top performances and must-see plays from Friday's schedule.

The Pistons take care of business

A win for Detroit and a loss for Cleveland means the Pistons are still undefeated and the Cavaliers are still winless.

The Cavs were without Kevin Love as the five-time All-Star was sidelined with foot soreness. Blake Griffin and Andre Drummond both made the most of his absence down low with a combined 52 points, 32 rebounds, three assists and two blocks.

Drummond had 22 of those 32 rebounds himself, giving him his second 20-20 game of the young season.

No answer for Damian Lillard

The second half of the Blazers-Magic game belonged to Damian Lillard.

After a quiet first half in which Orlando held him to seven points on 2-for-8 shooting, Lillard went off in the final two quarters to the tune of 34 points on 11-for-15 shooting.

Damian Lillard goes off for 41 PTS (34 in the second half), 7 REB, 6 AST in the @trailblazers road win! #RipCity #KiaTipOff18 pic.twitter.com/QG45y9ydyt

Thanks to an Orlando fan that decided to heckle Lillard, Portland has now won three of its first four games.

The Celtics do it again

Trailing 50-34 at the half, the Celtics rallied back by making nine of their 14 3-point attempts in the third quarter alone. They then outscored the Thunder 27-22 in the fourth quarter to put the finishing touches on their 16th double-digit comeback since the start of last season.

According to ESPN, that's tied with the Golden State Warriors for the most in the NBA.

The season didn't get off to the best of starts for the Lakers, but they followed up their first win of the LeBron James era by defeating an undefeated Denver Nuggets team while on the second night of a back-to-back.

LeBron had his fingerprints all over this one, recording his first triple-double of the season - and his first in a Lakers uniform - with 28 points, 11 assists and 11 rebounds. He got some help from a number of teammates, most notably Lonzo Ball (12 points, 8 assists, 6 rebounds), JaVale McGee (21 points) and Kyle Kuzma (22 points).

On the Nuggets side, Nikola Jokic had a team-high 24 points and 11 rebounds. Canada's Jamal Murray also had a strong showing for Denver, putting up 22 points and grabbing 10 rebounds in 34 minutes of action.

Those two, however, combined for nine of Denver's 19 turnovers. Los Angeles turned those opportunities into 26 points.

Zach Collins' only 3-pointer of the game came from deep to beat the buzzer.

Blake Griffin's handle is unreal for a player his size.

Did Paul George not see what Jayson Tatum did to LeBron James in Game 7 of last season's Eastern Conference Finals?

Marcus Morris played the hero for the Celtics in a close win against the Thunder once again.

Malik Beasley came SO CLOSE to giving us an early Dunk of the Year nominee.

Jamal Murray, on the other hand, did decide to dunk on JaVale McGee.

Photo of the Day 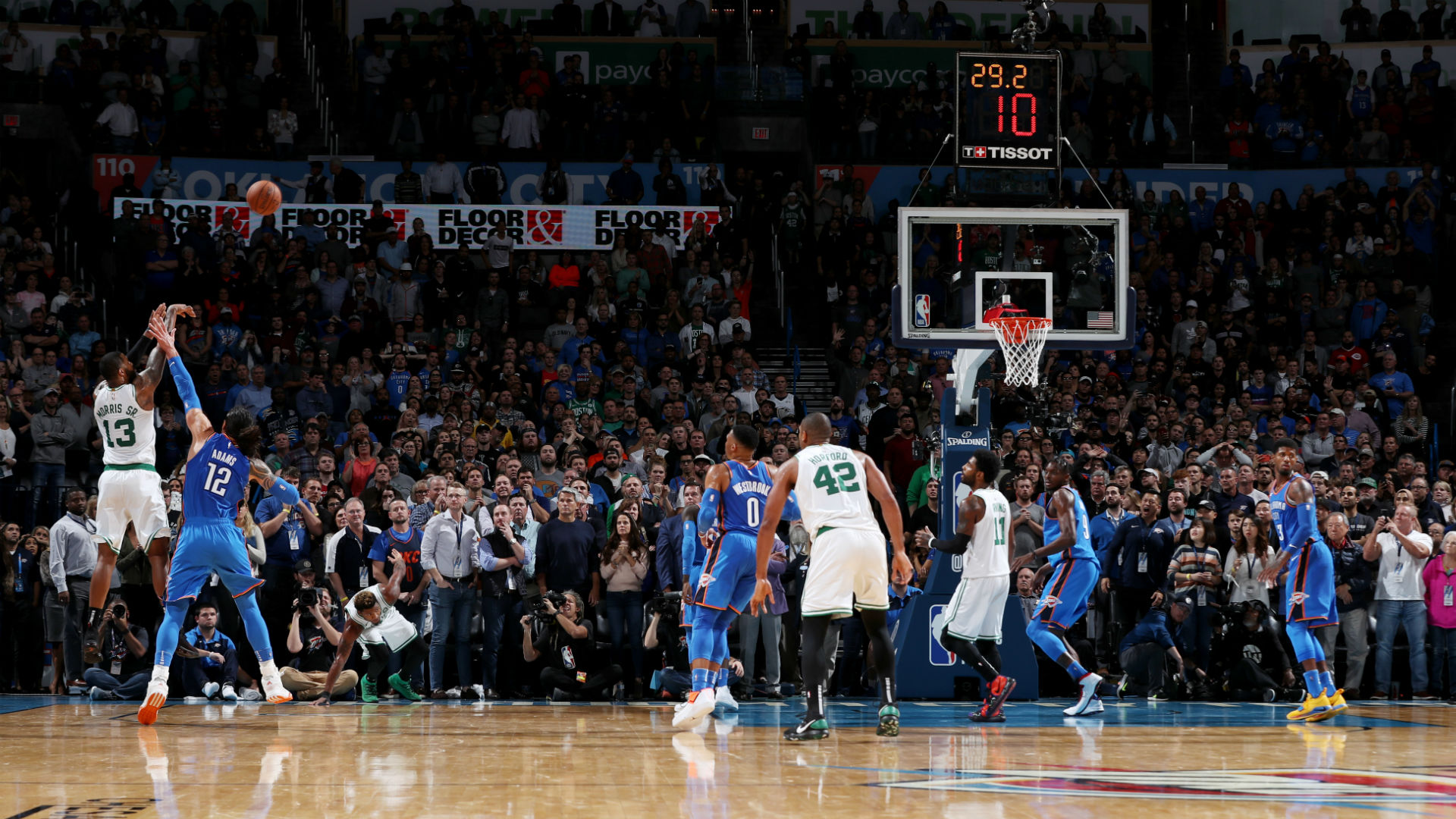 Quote of the Day

Damian Lillard has a message for the rest of the NBA following his impressive performance against the Magic:

Question: "In this era of dominant point guards, where would you place yourself?" @Dame_Lillard: "At the top."

Moment of the Day

Kyrie Irving gave his shoes to a young fan in Oklahoma City who was dressed up as Uncle Drew.

.@KyrieIrving gave his kicks to a young fan dressed as Uncle Drew tonight 😂🙏🏼