As the champagne flowed during the Los Angeles Lakers title celebration, LeBron James stood with his arm around Anthony Davis, found a camera and proclaimed "they ain't seen a duo like this in a LONG time."

In a time where "big threes" have more or less taken a back seat, we have entered the era of the modern-day duo, where no two pairs are alike. With that in mind, I've ranked the 15 best duos from the 2019-20 season, taking the regular season and playoffs into account.

Now that that's out of the way, let's get to the rankings.

By far the youngest duo on the list, this choice is largely based on the potential shown by these two during the 2019-20 season.

Ingram, 23, earned the first All-Star selection of his career in 2020, was also named Most Improved Player as he's emerged as one of the league's most prolific perimeter scorers. The 20-year-old Williamson, on the other hand, displayed that he was one of the league's best interior scorers during his 24 games this season.

Another young duo of a prolific scorer and former No. 1 overall pick.

Booker, who will be 24 next season, took the All-Star step during the regular season. During the NBA Restart, he took a step towards Superstardom as he helped lead Phoenix to a perfect 8-0 record. Holding it down on the interior is the 22-year-old Ayton, who, despite not receiving much acclaim, posted averages of 18.2 points (on 54.6% shooting), 11.5 rebounds and 1.5 blocks in 38 games last season.

When CP3 made his NBA debut, Gilgeous-Alexander was just seven years old but the difference in age didn't seem to have any type of adverse effect on the chemistry of this pair.

Paul reemerged as an All-Star and legitimate MVP candidate this season, all while showing Gilgeous-Alexander the ropes and passing off the blueprint in order for him to become a superstar in his own right. It clearly worked, as the overachieving Thunder earned the West's No. 5 seed and were a few plays away from advancing to the West Semis. 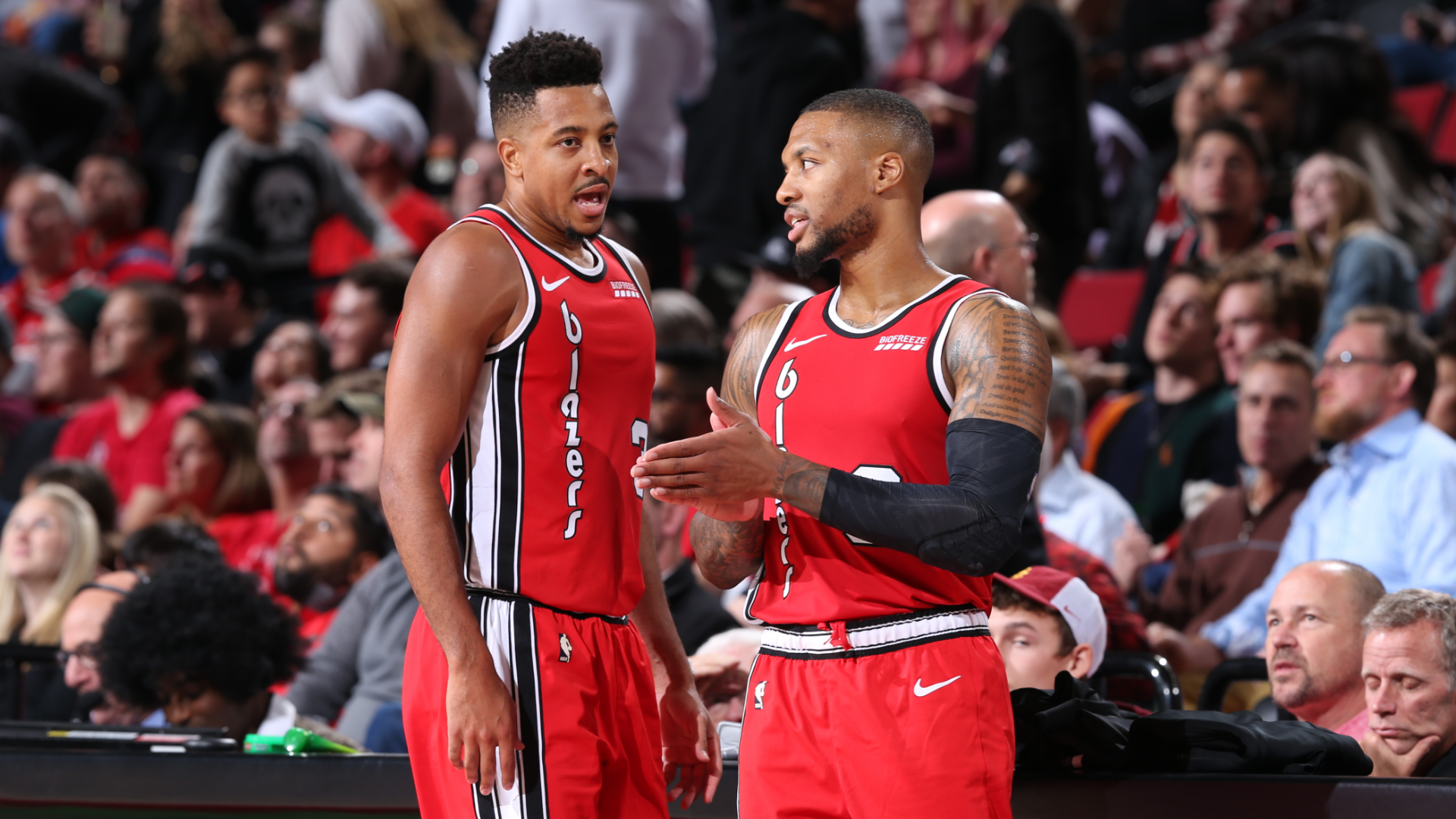 This duo coming in at 12 is more of a credit to the rest of the league's duos rather than a knock on them but Dame and CJ have been doing it at a high level for some time now.

The ways in which these two complement one another are a big key to success, as we saw Lillard tap into another level during the NBA Restart to lead this Trail Blazers team to the West's eighth seed. And while McCollum struggled due to playing through a spinal injury, he delivered a clutch performance in Portland's play-in victory.

Mitchell and Gobert are the first duo of All-Stars to make the list, with each player earning their first nod in 2020.

Led by this duo, the Jazz were largely successful throughout the regular season, finishing sixth in the West with a 44-28 record. Gobert, again a finalist for Defensive Player of the Year, is still one of the league's biggest impact players on that end of the floor while Mitchell ascended towards superstardom with his prolific performances in Utah's first-round loss to the Denver Nuggets.

As time goes on, the fit between Philly's two key pieces appears to be more and more complicated, but their talent is undeniable.

The two again appeared in the All-Star game together for a second time while Simmons earned All-Defensive First Team honours for the first of what is likely many times of his career. Philly struggled all year but because of this duo, it was still considered a threat to figure things out and make noise in the postseason. They're that talented.

Had it not been for Simmons' injury during the restart, the Sixers might have found a way to make noise in the playoffs.

As Siakam struggled during his first postseason as the go-to guy, Lowry picked up the slack in ways that many others in this league are incapable of, which is exactly what a member of a one-two punch should be able to do.

And though they do make up the majority of our recent memories, we can't allow Siakam's playoff shortcomings to define another breakout season in which he became an All-Star starter and earned All-NBA honours for the first time in his career.

Lowry and Siakam have great chemistry as a pair, as evidenced by their time during All-Star weekend and Lowry's words of encouragement and advice for Siakam following Toronto's Game 7 loss to the Boston Celtics.

When you talk about fit, it doesn't get much better than that of Doncic and Porzingis.

The 21-year-old Doncic didn't make the leap towards superstardom this season, he clearly established he is a Superstar in this league, with a capital S. It was the perfect situation for the 25-year-old Porzingis, who averaged 20.4 points and 9.5 rebounds this season after missing 20 months due to an injury suffered while with the Knicks.

We know Porzingis can perform at an All-Star level and, as he and Doncic continue to grow on a similar timeline, Dallas will continue to see even more success.

As alluded to earlier, it was a close call between choosing Brown or Kemba Walker, who was actually Boston's other All-Star in 2020 but Brown earned the respect of the NBA.com Staff on our end-of-season player rankings. It's warranted, too.

It's become a near-undisputed fact that Tatum is one of the league's top 10 talents but what many may not realize is the gap in talent between him and Brown isn't too large at all. Considering Brown will be 24 and Tatum will turn 23 next season, this duo might have the most untapped potential of them all.

They've only begun to scratch the surface.

You don't see MVP backcourts very often. Despite the rough ending to the Rockets 2020 postseason run, Harden and Westbrook had moments in which they both shined during the 2019-20 season.

In 25 games played from New Year's through the Rockets' win over the Milwaukee Bucks in the second game of the restart, Westbrook averaged 31.6 points (on 52% shooting), 8.2 rebounds and 6.9 assists. He would then miss four of the team's last six seeding games and the first four games of the playoffs, and it was clear that he wasn't himself.

And while Harden ran out of steam during the postseason, he led the league in scoring for a third consecutive year and earned All-NBA First Team honours for a fourth consecutive year. Houston's got some things to figure out moving forward - namely its coaching search - but this duo is still something special.

Talk about only scratching the surface.

Nikola Jokic is hands down the best centre in the NBA. While we knew the 25-year-old Jokic was one of the best centres in the league coming into the year, his performance in the 2019-20 season - specifically in the restart and the postseason - put us on notice that there's not much of an argument to be made for anyone else anymore.

This postseason, the 23-year-old Murray showed that his star can shine just as bright, transcending towards stardom with averages of 26.5 points, 6.6 assists and 4.8 rebounds, including two 50-point games, a game of 42 points and a 40-point performance.

And it's not just the numbers or the feel-good story of Denver's come-from-behind series wins, either. Jokic and Murray have insane chemistry on and off the floor together, complementing each other's playing styles well at a young age.

It's a huge key to their success.

Not only did Butler and Adebayo display amazing chemistry on the court in their first year as teammates, but they also developed an amazing bond off the court.

It's a product of the fact that each player is motivated by a chip on their respective shoulder and makes for a great pairing.

Butler and Adebayo both represented Miami at the 2020 All-Star Game; Butler would go on to be Miami's lone All-NBA selection while Adebayo would earn the team's lone All-Defensive Team selection. And that was just for their work in the regular season.

In the postseason, they both stepped up to another level, with Adebayo stepping up on both ends of the floor and Butler being the star and veteran leader. The result? An NBA Finals run.

Who knows how the series would have gone had Adebayo not gone down with an injury but Butler did all he could, putting forth two legendary performances that allowed the Heat to extend the series to six games.

There's a reason Milwaukee was at one point on pace to win 70 games this past season.

In Giannis, you've got the back-to-back reigning MVP and reigning Defensive Player of the Year and in Middleton, you have one of the league's more underrated All-Stars. He dropped two spots to 21st in our end-of-season player rankings, ahead of only two other All-Stars in Westbrook and Gobert.

Yes, the Bucks season came to an end much earlier than anticipated but it should not take away from what either of these two were able to accomplish.

In earning both MVP and Defensive Player of the Year honours in the same season, Giannis made history. Middleton was close to making history, too- his average of 20.9 points on .497/.415/.916 shooting splits meant he was only a few missed field goals shy of a 50-40-90 season while scoring 20 points per game.

You've gotta give credit where it's due and this pair led Milwaukee to the league's best record for a second straight year.

Again, the Clippers season ended in disappointment but that shouldn't take away from this duo.

There were some chemistry issues throughout LA's locker room but it doesn't take away from how scary Kawhi and PG were when clicking on all cylinders.

Leonard took his game to another level this season, averaging a career-best 27.1 points per game during the regular season before averaging 28.2 points during the Clippers' postseason run, including five straight games of 30-plus points in the opening round.

Looking past George's postseason shooting woes, he averaged 21.5 points while shooting 41.2% from deep in a season in which he was coming off of offseason surgery. He showed flashes in the postseason at times but ultimately, there was too much to overcome.

There's a reason why there were high expectations placed on this duo, and that lands them at No. 2.

Was it even in question?

LeBron was right, we haven't seen a duo like this in a long time. And it resulted in them leading the Lakers to a title, concluding their first season led by the superstar duo.

Both James and Davis earned All-NBA First Team honours, making them the first pair of teammates to do so since Steve Nash and Amar'e Stoudemire at the end of the 2007 season. While LeBron was runner-up for MVP, Anthony Davis was runner-up for Defensive Player of the Year.

It's no denying that this is a pairing of two of the league's top-five talents.

The two do an excellent job of picking up the slack if one of them is off and when they're both on, you couldn't draw up much of a better fit. Playing alongside Davis enabled LeBron to lead the league in assists in his 17th season while Davis has tapped into another level as a star with James by his side.

These two might be on top for a while.